Fast rising Carmarthen based female trio Adwaith unveil their brilliant new double A-side single 'Lipstick Coch' and 'FEMME' this summer. Vividly depicting their knack for melody and sound and their ability to create a direct emotional connection with the listener. Adwaith’s brand new double A-side single heralds a beginning of a new sound for the band. Whereas previously the band painted sounds with a palette of muted sombre colours Lipstick Coch and FEMME explode with bright confident neon. 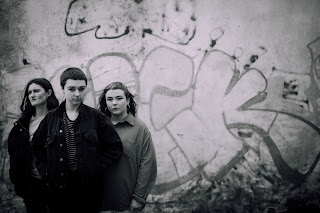 "Criticise the double-standards of promiscuity between the sexes, all while wrapping it up in a sweet, jangly, hook-laden melody reminiscent of C86 that makes it all the more biting." DIY MAGAZINE

'Lipstick Coch (Red Lipstick)' is a fully charged post punk anthem in the vain of The Slits at their most immediate, an anthem celebrating youth, androgyny and love.The flipside 'FEMME' on the other hand could quite easily have been a long lost single on Postcard Records or Cherry Red Records from the mid-80s.

With its jangly C86 indie pop sound as a canvas to the witty, heartfelt lyrics Adwaith discuss femininity and the sexism experienced by them as young women. This is an inspirational song from an inspirational band willing to stand up for their beliefs.

These songs are brave, creative moves both musically and lyrically for the band, yet they retain the distinctive melodic gift that is so recognisable in all Adwaith’s songs. A gift that has gained the band fast critical acclaim and extensive radio plays, most noticeably on BBC Radio 1, BBC Radio Wales, BBC Radio 6, BBC Radio Cymru and Amazing Radio.

The release of the singles come hot on the heels of Adwaith’s Maida Vale recording session for Huw Stephens in these legendary BBC studios. Their summer is full of activity including a live set on the BBC Introducing Stage at FOCUSWales festival broadcast live on Adam Walton’s BBC Radio Wales show.

Adwaith were introduced on the BBC Introducing stage at Latitude festival as the most exciting band from Wales in decades and will finish the summer on the Gorwelion /Horizons stage at Festival No 6. In the middle of all this activity, Adwaith have managed to record their debut album, and their label Libertino believe its 'creatively ground breaking and will stand as one of the important albums from Wales alongside the works of Gorky Zygotic Mynci, Super Furry Animals and Gwenno.'

Ummagma will release their new ‘LCD’ EP on September 22nd, preceded by the stunning lead single 'Lama', remixed by Cocteau Twins mastermind artist-producer Robin Guthrie. As the first taste of Ummagma's forthcoming four-track ‘LCD’ EP, Robin Guthrie’s mix of ‘Lama’ is a tantalising window into their breathtaking dream pop sound. This musical tapestry, built around delicate percussion, shimmering guitar trails and gorgeous vocal refrains is familiar yet otherworldly. It’s a sublime snapshot of Ummagma as you have never heard them before. When mutual friends put Ummagma and Cocteau Twins multi-instrumentalist Robin Guthrie in touch after introducing him to their music, he was so taken with ‘Lama’ that he decided to not only re-arrange it, but add his own guitar parts to the new mix. The result is this wonderful new version of the song. As a monumental member of the Cocteau Twins, Guthrie helped pioneer their classic 4AD sound throughout their existence and, once again, his trademark feedback drenched guitar sound is featured here, showing his subtlety, as well as his ability to craft majestic sonic textures. Ummagma are a dream pop duo formed of Shauna McLarnon, a vocalist from the Yukon wilderness and Alexander Kretov, a multi-instrumentalist from small town Ukraine. In a chance encounter, they met in the suburban sprawl of Moscow, where they were each pursuing different musical paths. Bonding over their shared influences and weaving in their diverse backgrounds, this affair with love and sound soon developed into a marriage and the musical union we know today as Ummagma. In 2013, Ummagma won the Alternative Eurovision on Amazing Radio, representing Ukraine. Ummagma ‘LCD’ involves not only one, but two legendary musicians, the other being maverick electronic musician Dean Garcia of Curve fame. Ummagma says they are thrilled that that two legends – both personal musical heroes of theirs – have helped shape their new EP. “I grew up listening to Cocteau Twins, Curve, and so many bands from the 4AD and Creation labels, and then later introduced them to my husband. He learned of them late, having been born in the USSR. We feel incredibly honoured that Robin Guthrie and Dean Garcia have shaped several of our tracks as they personally envision them,” says vocalist Shauna McLarnon. Ummagma release their new EP ‘LCD’ on September 22nd via Label Obscura (digital, cassette) and Somewherecold Records (CD). The EP will be available for pre-order on the duo’s Bandcamp. SELECT PRESS This is a really brilliant post-rocky shoegazey woozy ambient thing. It's absolutely beautiful - Dani Charlton, Amazing Radio Full kaleidoscope of sounds, harmonies and musical instruments… the result is massive with an intricate fabric - Rolling Stone Russia Ethereal pop indebted to Cocteau Twins and much of the rest of 4AD’s ’80s output - BrooklynVegan This is really very cosmic music. Made of stardust - Joe Foster (Creation Records) An honest, believable & beautiful lyric delivered by an honest, believable & beautiful voice. When you combine this with the swirling ambience of lush layered guitars this duo end up with their own unique sonic landscape - Malcolm Holmes (OMD) Ummagma’s sound is so trippy I had to buy new studio monitors to make sure I wasn't hallucinating... If Underworld or Chemical Bros did their song 'Lama', it would be proclaimed an instant classic- Rudy Tambala (A.R. Kane) https://ummagma.bandcamp.com/album/lcd
Posted by Sound & Vision PR at 07:23 No comments: